Bao has long been on my list of places to visit. But every time I went past their Soho establishment and stared at their long queue, it broke my heart. This time over Easter we decided to brave it, hoping that most people would be out of town for Easter so it would be less crowded. We were so wrong! 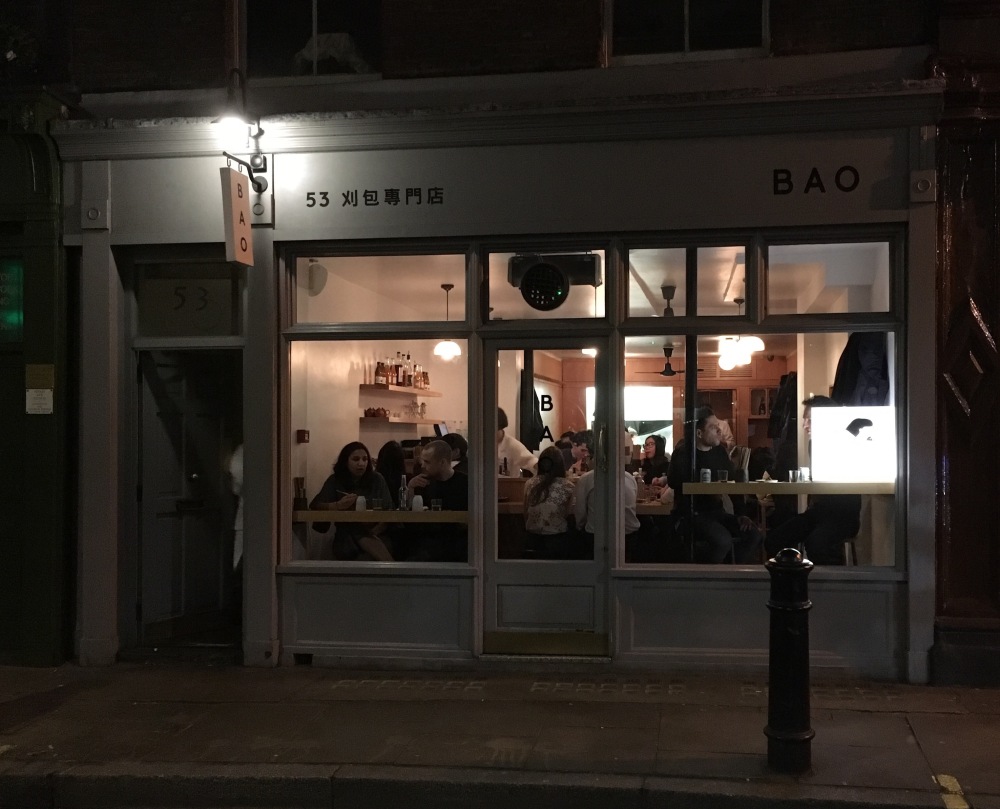 All the above strategies and thought processes went out of the window, as we still had to queue! There were about five couples in front of us so the the total wait time was about 40 minutes. Still not as bad, as the weather was mild and we arrived expecting to queue. I assume this will not be the case in summers though and the queues will be much longer as people won’t mind the mild temperatures. Still,  I think there must be a better way to manage this judging by its popularity. I hope they would take a leaf or two from the ever popular Burger and Lobster or another Soho favourite – Hoppers – and their queue-ing system where you can put your name down, and they text you when the table is ready. This is a much more sane idea and  allows one to enjoy the neighbouring drinking holes which surely is beneficial for neighbouring business overall.

Anyway back to the queue. The most entertaining part of the entire experience is how unsuspecting diners try to get in and some even have the cheek to grab the empty chairs that become available for a nano second, only to be politely pointed to the queue outside! The look of shock and horror of having to join the back of the queue of already ravenous Bao enthusiasts is priceless!

When we were finally summoned by the waitress when our table was ready, it indeed felt like we won a battle and this was our moment of glory!

Bao is quite a small space so service is swift to prevent the diners from lingering too long and keep the queue moving. As soon as we sat down, our waitress thrust the menus in our hands and quickly explained the ordering process. The main dishes are divided into essentially three parts- the Xiao Chi section (meaning snack or small eats), the all important Bao section and the sides. You are advised to order at least three to five items per person and the dishes appear in no particular order.

We immediately got down to business! I ordered the scallop with yellow bean garlic, the guinea fowl chi shiang rice, the confit pork bao and the fried chicken bao.

Husband went for the aubergine and wonton Crisp, the classic bao, and lamb shoulder bao. He also went for the scallop as there is only one piece per portion and sharing would have led to a domestic!

The first to arrive was the aubergine and wonton crisp, which I would describe as the Taiwanese equivalent of baba ganoush! The wonton crisps were great to scoop up the aubergine dip with, and added a crunchy texture to the entire dish. It was indeed very tasty.

Next to arrive were the eagerly anticipated Baos!

My bao had all the right flavours- there was the meaty flavour of confit pork belly accompanied by pork sauces, hot sauce and dried shallots for texture. It was absolutely delicious and everything one would like about crispy pork belly but in a miniature version, enshrined in between the pillowy comfort of the sweet bao buns.

Husband also enjoyed his Classic version which was braised pork with peanut powder, fermented greens and coriander- quite popular amongst the fellow diners. The bao had real depth of flavour and exceeded expectations.

We ordered some Taiwan beer to go with our meal which we felt would suit the overall theme of the evening very well.

Next destination to arrive in our culinary journey were the scallops – drizzled in an awesome smoky sauce, which we were encouraged to slurp directly from the shell. Yumi-licious!

Other baos to follow were my fried chicken and Husband’s lamb shoulder bao. The fried chicken one included soya milk marinated chicken with sichuan mayo, golden kimchi and sesame bao (quite different in looks to the other types of bao seen so far) . It looked like a chicken slider. Delicious, moist with crunchy flavours with the punch of the sauce coming through in good measure.

However the real winner amongst all the baos we tried so far, was undoubtedly the lamb shoulder.  It came with a coriander sauce, garlic mayo and soya picked chilli. The lamb was soft and tender and just melted in your mouth with flavours that you would normally not associate with lamb but it worked so well together.

Last to arrive was the guinea fowl rice, which was served with a sunny egg yolk which we were told to mix into the warm rice before starting. It was probably the most good looking dish  of the evening and looked stunning all put together in the bowl.

In spite of our waitress coaxing us to try, we decided to skip the fried Horlicks ice cream bao, although spying on neighbours tables,  it really did look lovely but we were stuffed. Even though portions are quite tiny, you do get quite full. I assume it’s the bao which makes it a filling meal. Well, perhaps for the next time.

Some of the other stuff that I would love to try from their menu would be beef soup, the Taiwanese fried chicken, the peanut milk and (if I could stomach it) the Pig Blood cake (which I have heard is a Taiwanese take on black pudding served with egg yolk).

I would DEFINITELY return to Bao. It’s an festival of international flavours and a treat to the taste buds. It serves dishes that I have never tried before which makes dining in Bao very exciting and novel.

For your first time, it is almost too much to take in and everything happens in a flash! So I would come back another day to savour these delicacies again at a more slower pace (if the waiters would allow it)!

I am, of course, praying that the queue will be shorter!