One of the biggest benefits of food blogging is getting to eat some of the loveliest food and meeting some awesome people from the hospitality industry and Instagram community. The downside is an expanding waistline and a shrinking wallet. Contrary to popular belief, I pay for the majority of my meals so I have to be prudent in picking restaurants that give me more value for my money.

It is times like these when a concept like First Table is a blessing. They collaborate with restaurants to offer you the first table of the day (generally early evenings) at a discounted value. So, for a £5 booking fee, you get 50% off food for up to 4 people, which is a bargain. This not only helps people like us, who love to eat out often, but also restaurant businesses as well to fill up their tables during quiet and off-peak times. It is a win-win situation for all.

When First Table contacted me about their service, I decided to try the concept out for myself. Registration was fairly straightforward and the booking system was easy to navigate! It is as simple as booking a restaurant online. They have a number of participating restaurants on their list and many more get added every day. I was pleasantly surprised how many trendy, popular and sought after venues were on that list already. It was quite hard to pick only one.

However, there was one restaurant in particular that I have been meaning to visit since its opening in January this year – Claw. 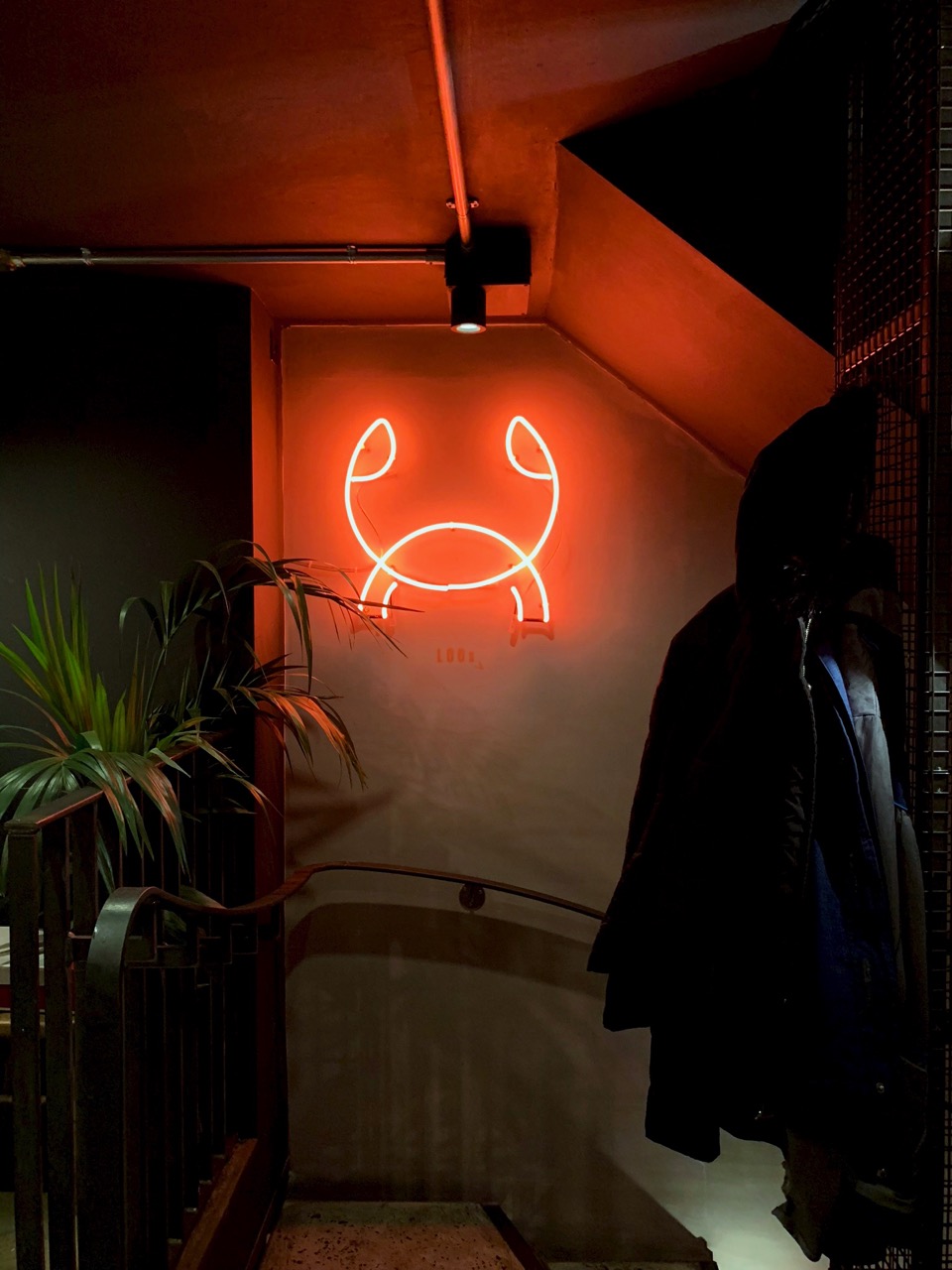 After supper clubs, food festivals and pop ups, this is the first standalone restaurant by owner Fabian Clark. Not only does their seafood-themed menu appeal to me but I also know and admire the work of Run for the Hills, who have designed the interiors of this space. When I spotted Claw on the First Table listings, it was a no brainer really. 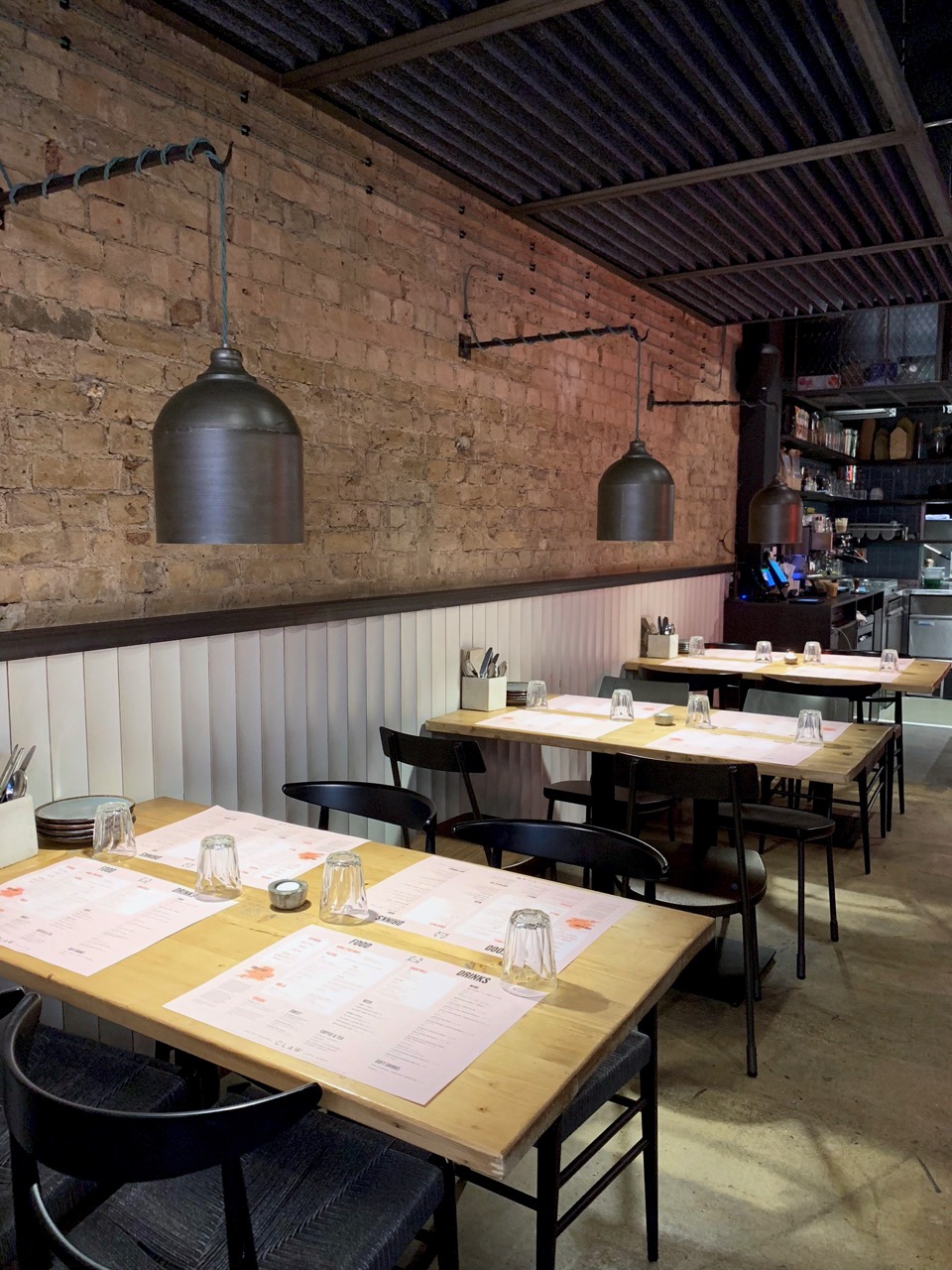 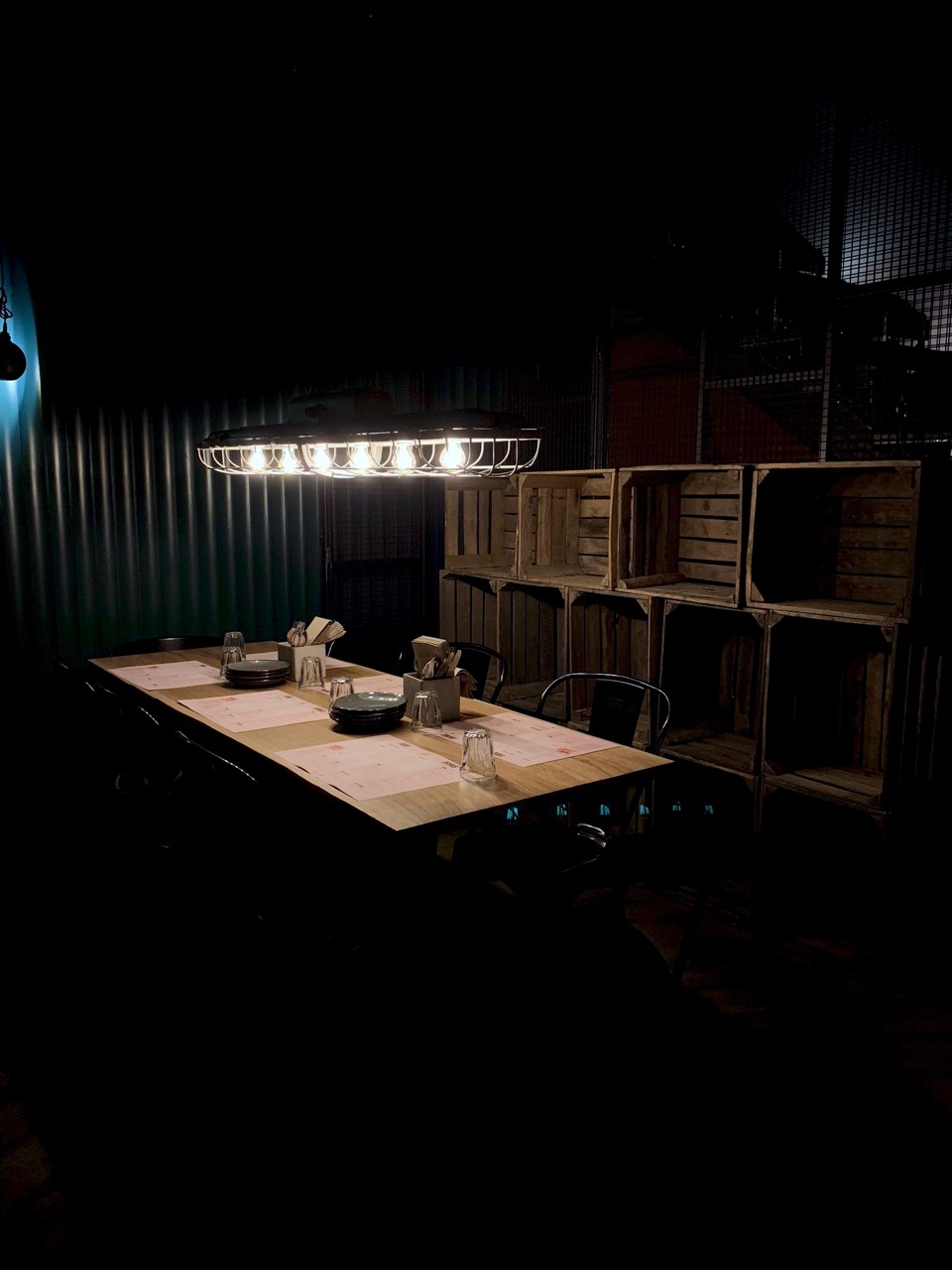 We were booked in for an early evening slot of 5:30 pm on a Sunday. The menu is seafood-based, with a lot of their fresh seafood sourced from Salcombe in Devon. We kicked things off with some small plates. First up was the Crab Mac & Cheese – Salcombe Crab, London Raclette and Ogleshield (£8). It was quite a light version, not the heavy duty gooey kind that one is used to but it helped elevate the crab element rather than overpowering it. The little bits of red onion sprinkled on top added a punchy contrast.

The KFC – Kimchi Fried Soft Shell Crab, Sweet Lemon Mayo (£10) – was my favourite. It was less crunchy than I would have preferred, but the underlying kimchi had a sharp, fiery zing to it. The Chicken Wings, Sesame, Caramel (£8) was on the sweeter side with the sesame adding a lovely bit of crunch and texture. They were proper-sized portions too.

From the larger plates, Kris opted for the The Wild Claw – Scottish Venison Hotdog, Salcombe Native Lobster, Szechuan Mayo, Crispy Shallots, Brioche (£18 with chips and salad). This was a one-off collaboration with another force of nature in the London food industry – Mac and Wild. We were lucky to catch this as it was the last day of the collaboration. The dish itself was very nice; the sausage on its own was quite dense as you would expect from venison meat. But combined with lobster, the flavours worked very well together. This dish was a whole other level of surf ‘n’ turf. 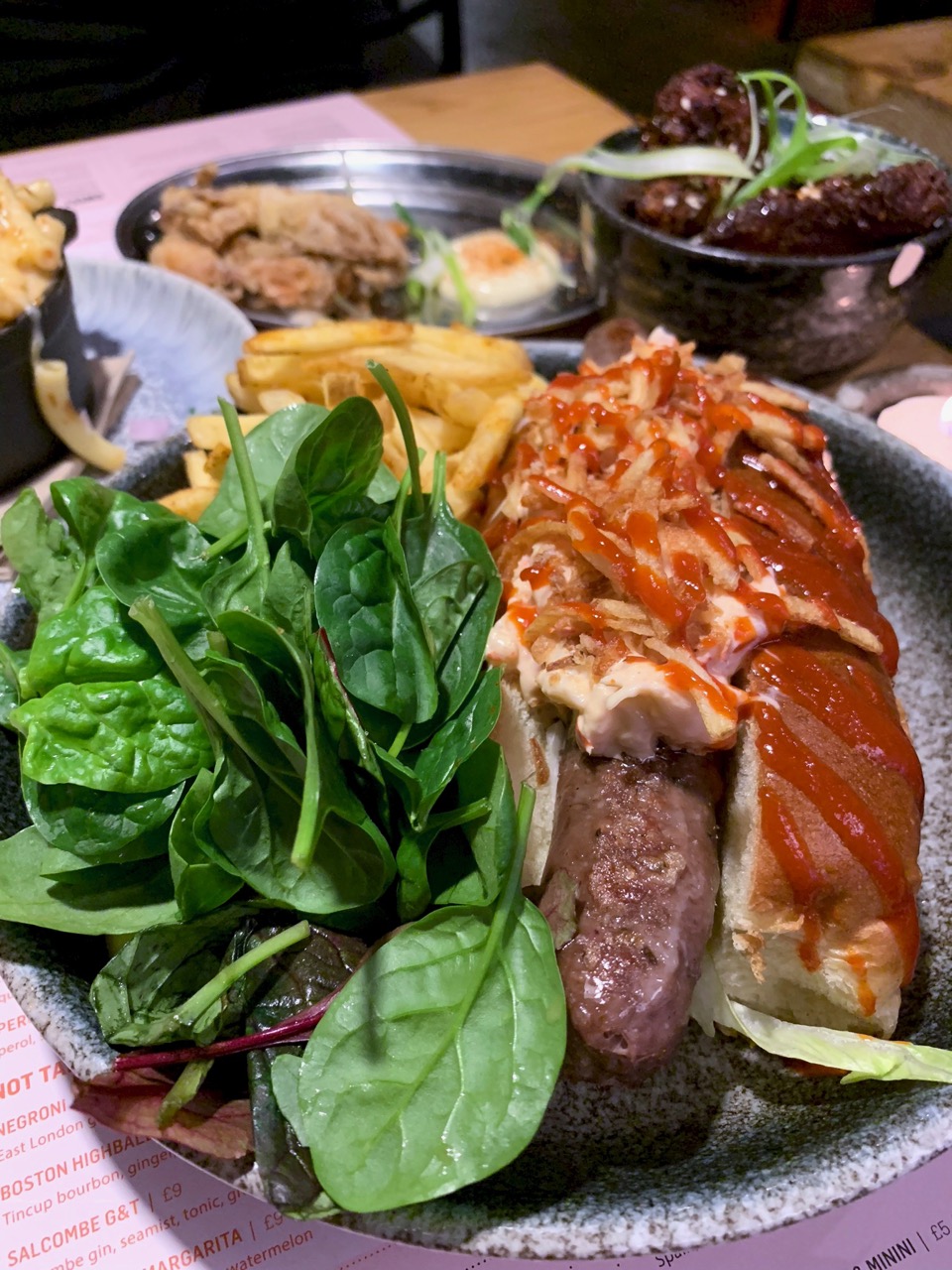 Claw does a deal where for an extra £3 you can convert any roll into a meal by adding chips and salad. The chips we got were very well seasoned and there was a decent portion of a fresh green salad. I thought this was excellent value for money and a complete meal by itself.

I opted for the Lobster and Crayfish Roll (£15), which was bursting with seafood. The brioche was milky, melt-in-the-mouth soft which made it quite messy to eat but it was very satisfying. I feel this dish would be great for summer munching.

The meal ended on a glorious note with a Blueberry Cheesecake Ice Cream Roll – Ricotta Ice Cream, Blueberry Jam, Old Winchester Cheese (£5). I first heard about this dish on a TimeOut Review where food editor Tania Ballantine recommended this one as their must-order dishes. I can see why. It hit all the right notes from me – sweet, tangy from the blueberry and savoury from the cheese. 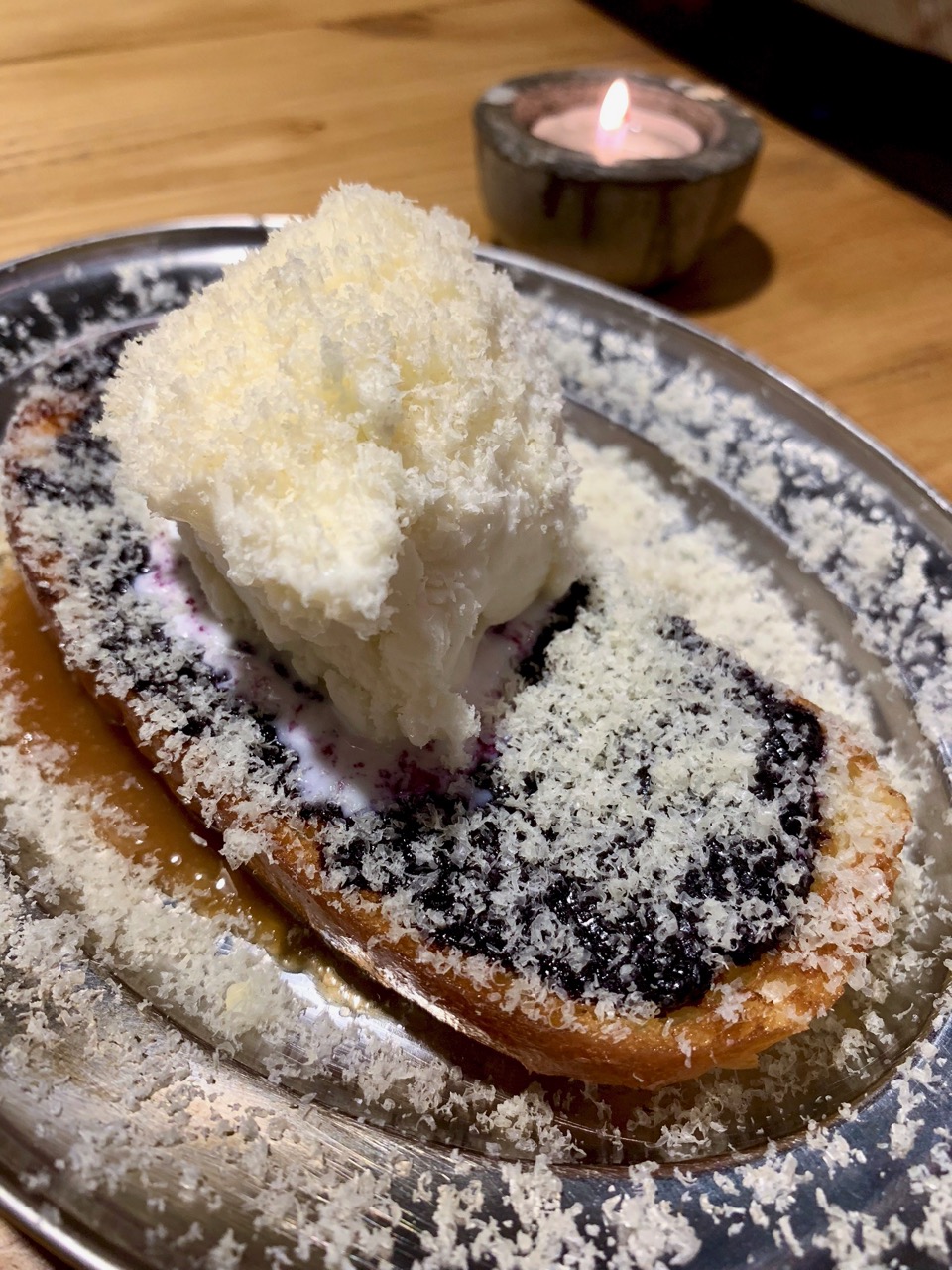 Service was relaxed and friendly throughout the evening.

In spite of a slow start, Claw has gathered momentum gradually over the last few months since its launch. It is surrounded by prominent dining destinations like Dishoom, Jinjuu, Breddos Tacos and the eateries at Kingly Court so undoubtedly competition is fierce. In spite of that, Claw has managed to carve a place of its own by maintaining quality food that generates repeat customers, clever collaborations with other restaurants and working with the local community.

I was pleased to finally tick Claw off my list, thanks to First Table. There are no hidden costs or catches here. I am a bonafide fan now and have recommended First Table to friends already. Every week, I keep an eye on their listings to see which new restaurant has been added so I can plan my weekend accordingly.

N.B. This blog post has been produced in collaboration with First Table but all photos and opinions are mine.