Kutir is an Indian fine dining restaurant that opened about six months ago. It is a cozy restaurant, set inside a converted Chelsea townhouse, on a quiet street off Kings Road. 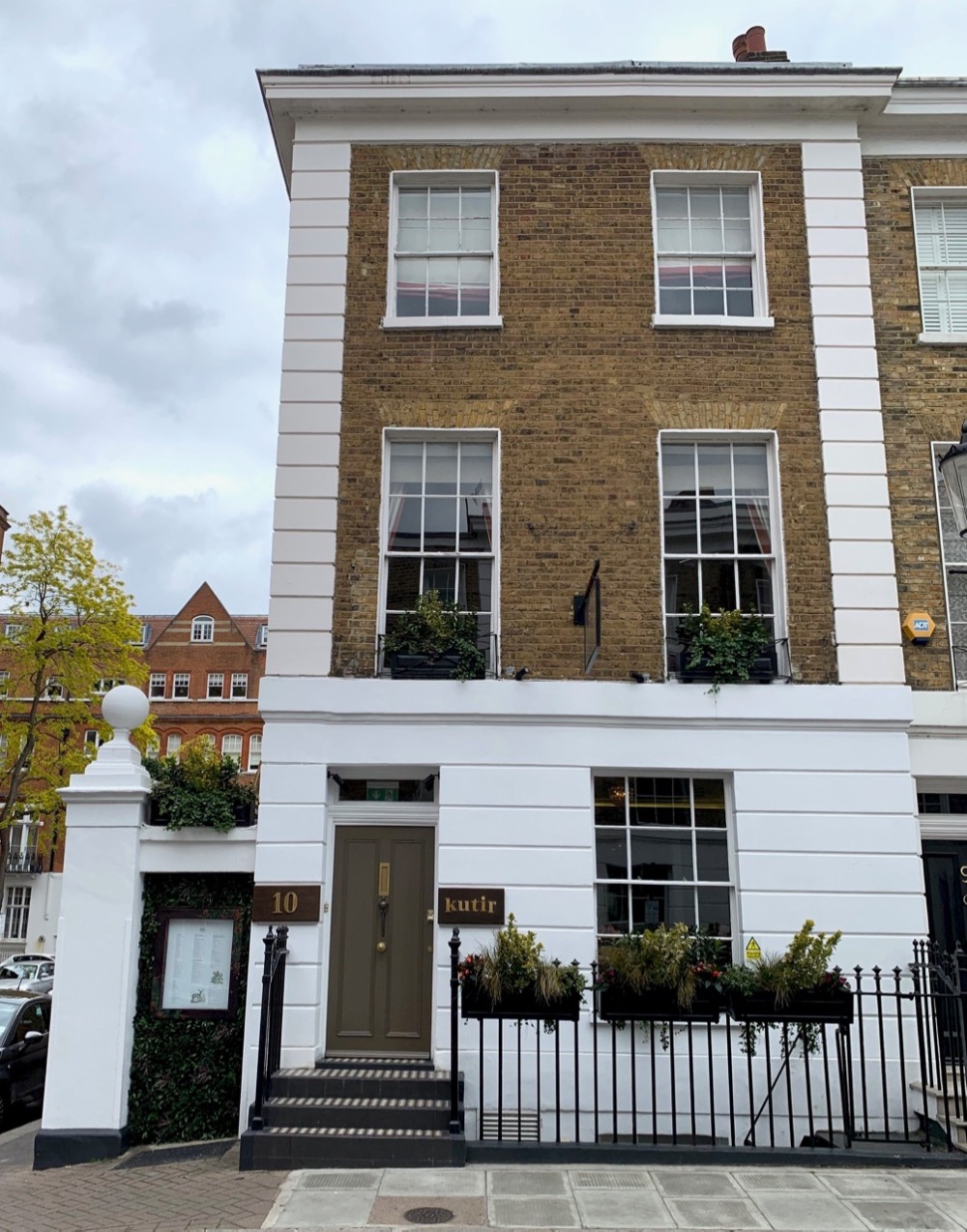 It is a joint venture between Chef Rohit Ghai (formerly of Gymkhana and Jamavar) and Abishake Sangwan. This powerhouse duo brought their combined experience and expertise within the global hospitality world to creating Kutir, their first solo project together. Kutir means ‘cottage’ and the restaurant is a homage to their respective early careers in luxury Indian heritage hotels within Indian wildlife sanctuaries. 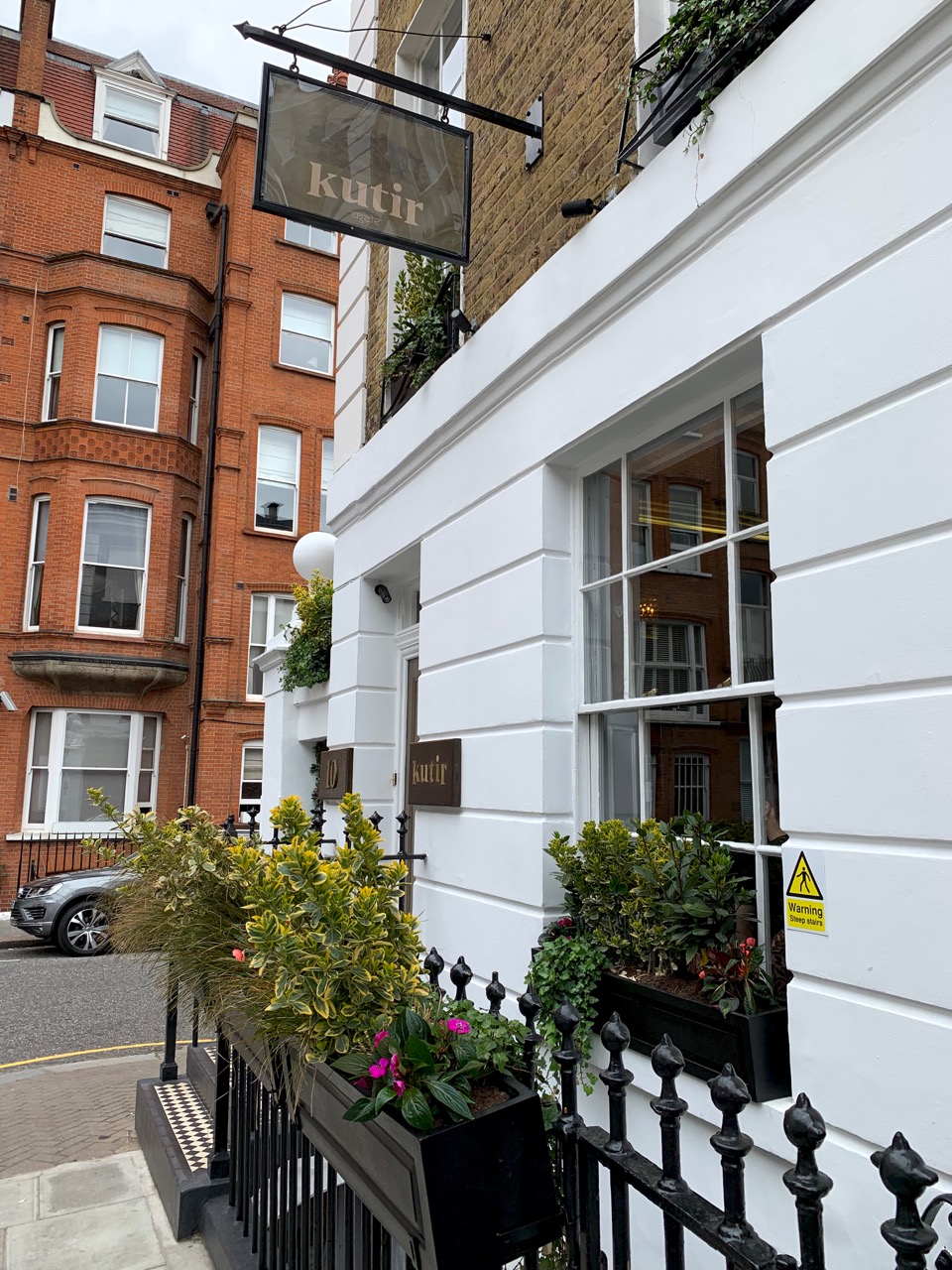 Inside, it is awash with light thanks to the large windows at the front and a large skylight at the rear of the restaurant. In spite of all that bright, the space still manages to feel intimate and homely with its use of sage green walls, warm woods, dark herringbone patterned floors, swish marble tables and marbled fireplaces. The wildlife country charm is evident from the intricate foliage and wildlife motifs on the walls, floral print chairs and even the front of the bar. The whole place feels serene, tying back to the concept of sanctuary and retreat. 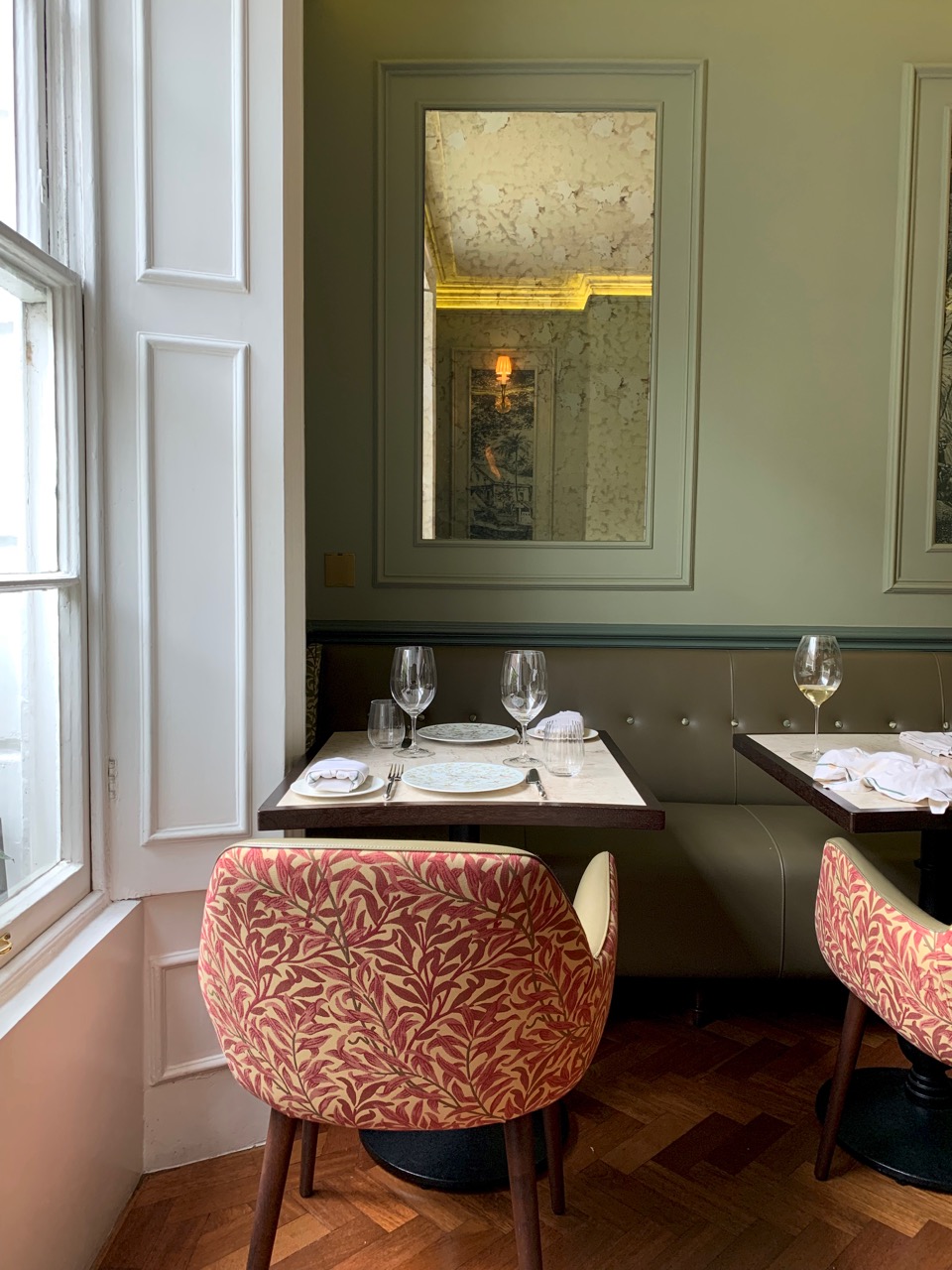 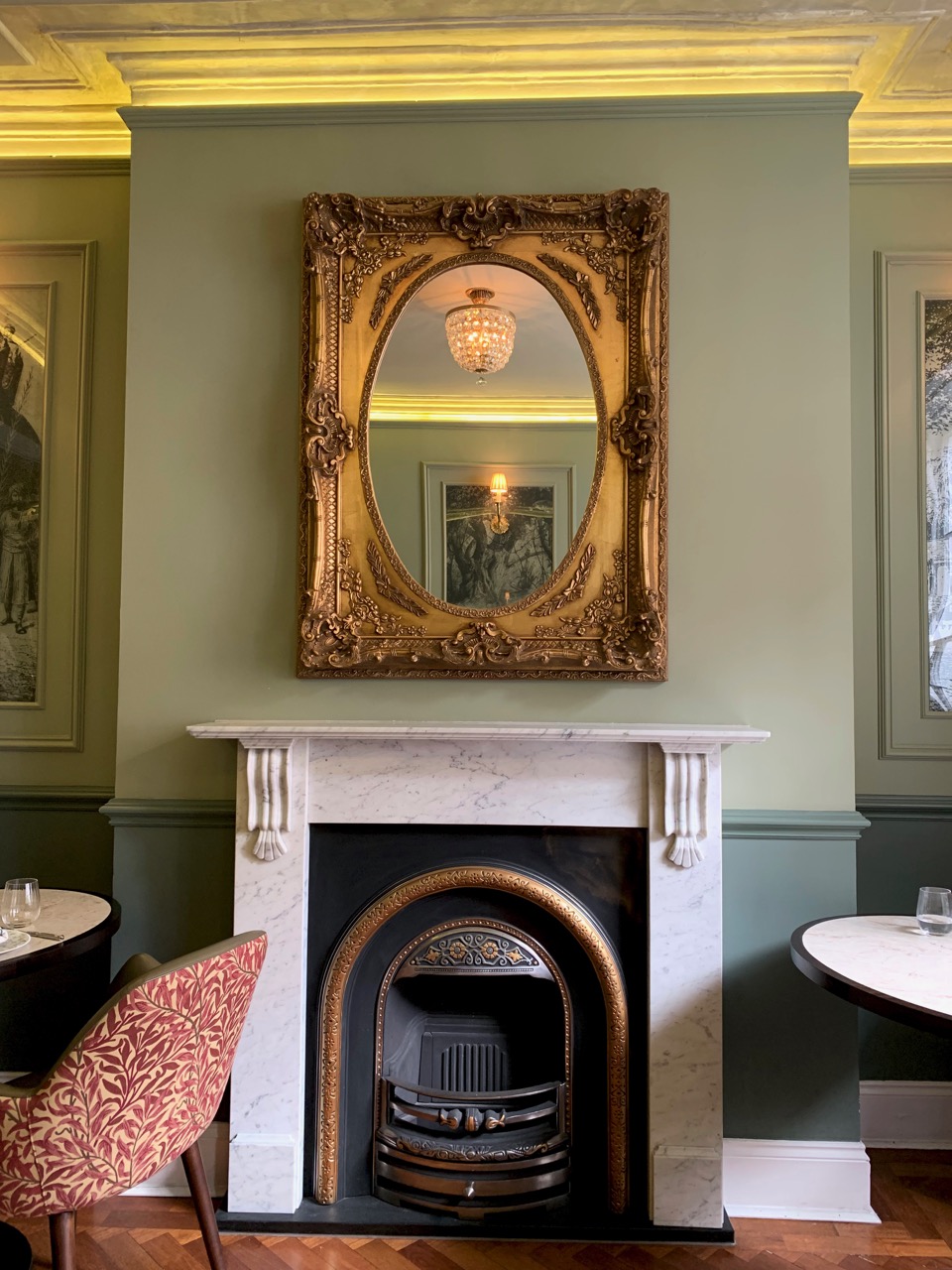 The menu comprises of a Tasting Menu, À La Carte, and a Weekend Set Menu. What I liked about the set menu was, unlike other restaurants, this menu does not compromise on the choices. It had a lot of their signature and popular items from the main menu (albeit smaller portions) so this could be a great wallet-friendly way to sample some of the culinary creations at a fraction of the price.

For the purpose of this review, we decided to order from the À La Carte. They also have an expansive and well-curated wine list. Scotch whiskys have a prominent presence too, a nod to the grand old Indian obsession for the good stuff.

We ordered three small plates to share between the two of us as starters. It was tough choosing as everything looked and sounded rather delicious. Most of the dishes range from £10 – £16 and are bigger than your average small plates portions in other restaurants.

The Lamb Chops were simply mind-blowing. They were melt-in-the-mouth soft with no chewy bits whatsoever that I quite often find in other Indian restaurants. The meat was cooked through with minimal pink in the centre and you could get the spiced lamb element coming from it.

The Soft Shell Crab was excellent. It looked rather dramatic, twin crabs splayed on the plate. The spicy, flavourful batter was crunchy but didn’t overpower the sweet and soft crab flesh inside. It was slightly flaky too, so added a bit of texture. We quite liked the addition of the parsnip crisps and the spicy ketchup adding elements of interest and contrast.

The Quail Naan was wonderfully moreish. I could quite easily have that everyday! All the elements worked together harmoniously: the quail imparted interest; the naan had a soft yet solid base that cut nicely under the knife; the eggs nice and creamy; and finally, a bit of kick coming from the green chillies. Overall, we had three winning dishes.

From the mains, we were cajoled to try the Chicken Tikka | Masala Fenugreek, Tomato, Kashmiri Pepper by our very cheerful and enthusiastic waiter Luca. The tikka was mild to moderately spicy with a bit of tang to it. There was a hint of bitterness coming from the fenugreek leaves which was an interesting little twist. Overall, this was a nicely refined version of a very classic Indian dish.

Kris only had eyes for the Lamb Shank | Purple Potato, Rogan Josh Sauce, Stone Moss, Chokha. The meat on the lamb shank was soft and came off the bone quite easily; it was achingly tender – a testament to the slow-cooking process. The sauce, poured at the table, had depth and intensity and added further zing to the dish. The only minor niggle was I wish they hadn’t poured all the sauce over, as we couldn’t really taste the tiny purple potatoes at the bottom of the plate.

We decided to skip dessert but then the lovely team at Kutir offered us a complimentary dessert of Cassata | Mango, Cranberry, Pistachio, Pink Peppercorns. It looked sensational on the plate and tasted even better. It was the perfect amalgamation of two of my favorite sweet things – ice cream and cake! 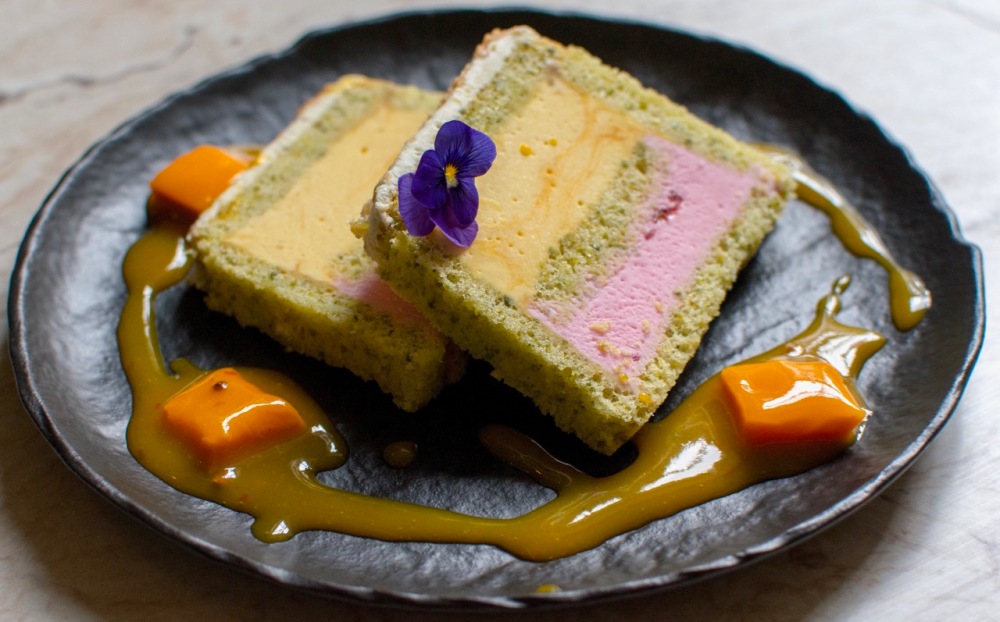 In terms of service, the staff looked after us well. The manager William was very helpful and attentive and the rest of the staff were on their game too. Tables were meticulously cleared and cleaned after each course which always goes down well with me. Prices are actually very reasonable considering the postcode. 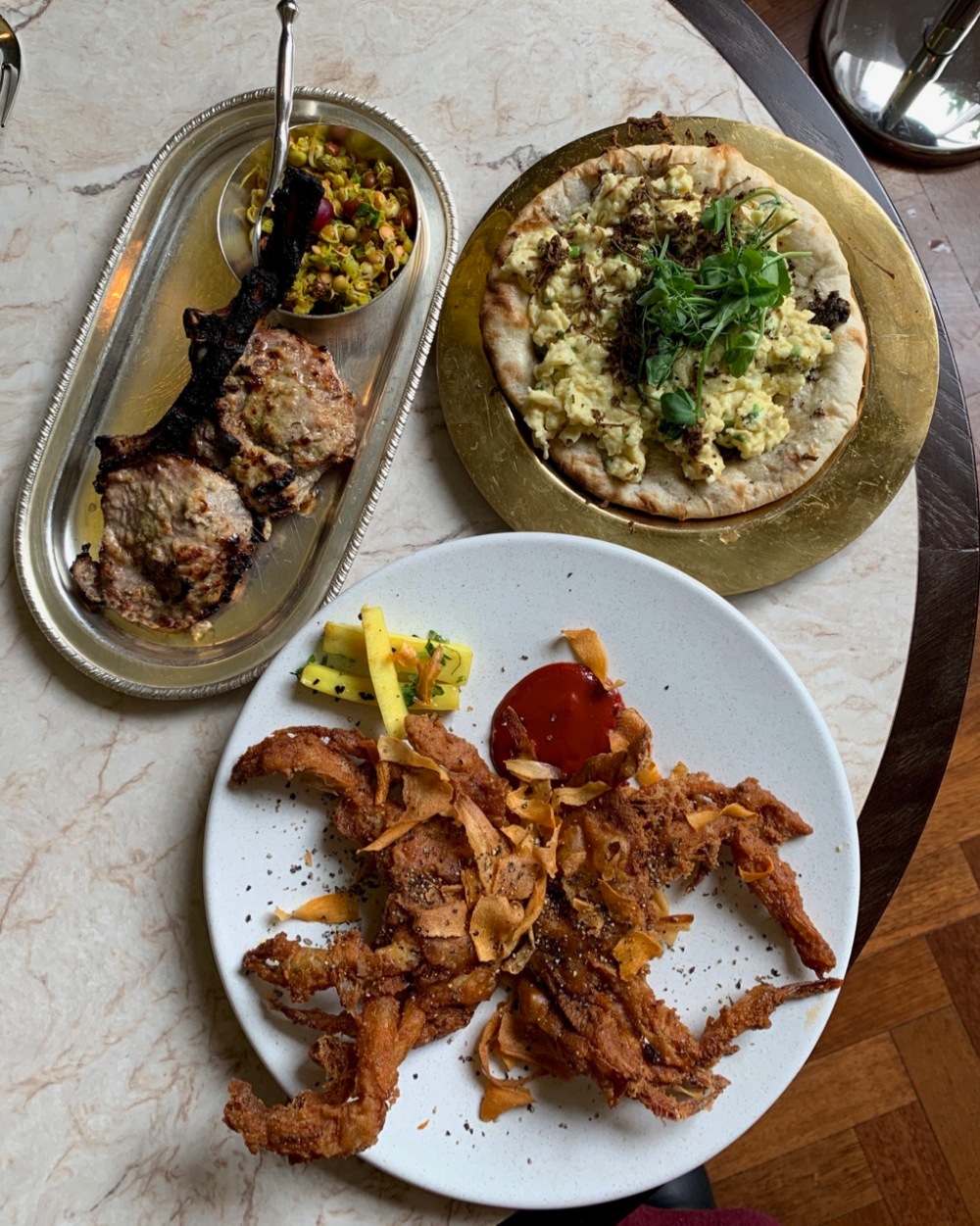 Overall, Kutir lived up to the hype and expectations. For me, the small plates are the real highlights, showing the culinary genius of the chef and his team. Some of the mains are more conventional Indian, mouthwatering nevertheless. My recommendation would be to definitely order as much from the small plates menu as possible to truly grasp the diversity and high quality of Chef Rohit’s cooking.

N.B. Our food bill was discounted but all photos and opinions are mine.