You know that phrase when they say what you have been looking for all this time has been right under your nose all along? Well, our experience with Lots Road was something like that. Working round the corner from this pub, I have visited Lots Road on several occasions in the last four years, mostly for after-work drinks. I have also religiously followed them on social media. So when Ben invited me to try their newly launched menu as a thank you for being loyal fans, we were there with bells on!

Lots Road spectacularly occupies a corner of an otherwise quiet and inconspicuous roundabout near Chelsea/Fulham. It is not on the main stretch of King’s Road so some might even say it’s a Chelsea hidden gem. For people like us who work in the area (with not too many great pubs to boast of), this place is an institution. 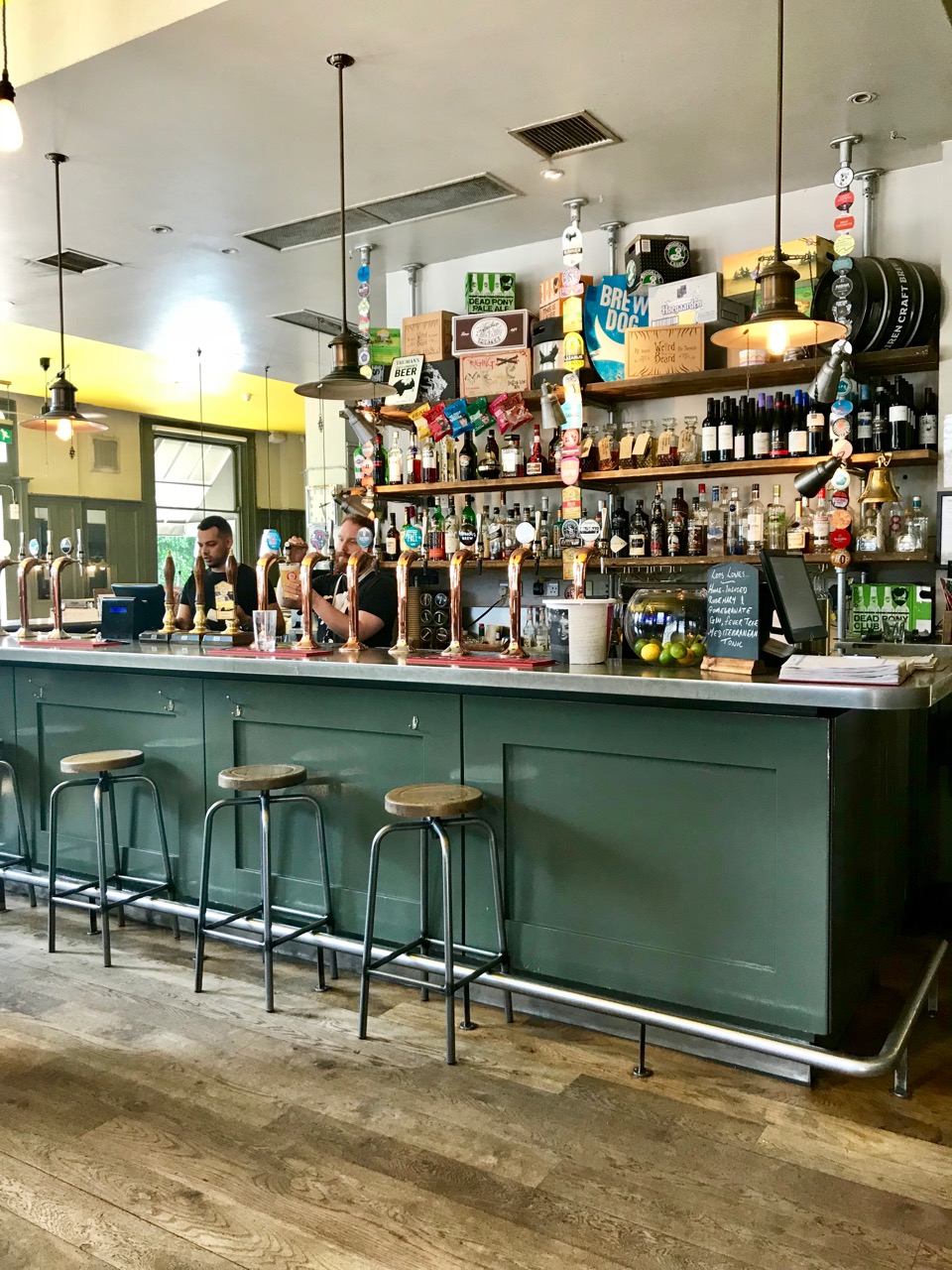 First – drinks. Lots Road have an excellent craft beer selection and work with well-known UK breweries such as Fourpure. During our visit, we tried a bevy of craft beers including the very interestingly titled (and my favourite) Hopocrisy – a Belgian Pale Ale from Stonehaven. I am not a massive beer drinker, but Ben’s recommendations suited the food we had and now I am open to the idea of pairing food and craft beers! So if you are a craft beer aficionado then do give this place a try. They have recently added some exciting new ranges to their collection. 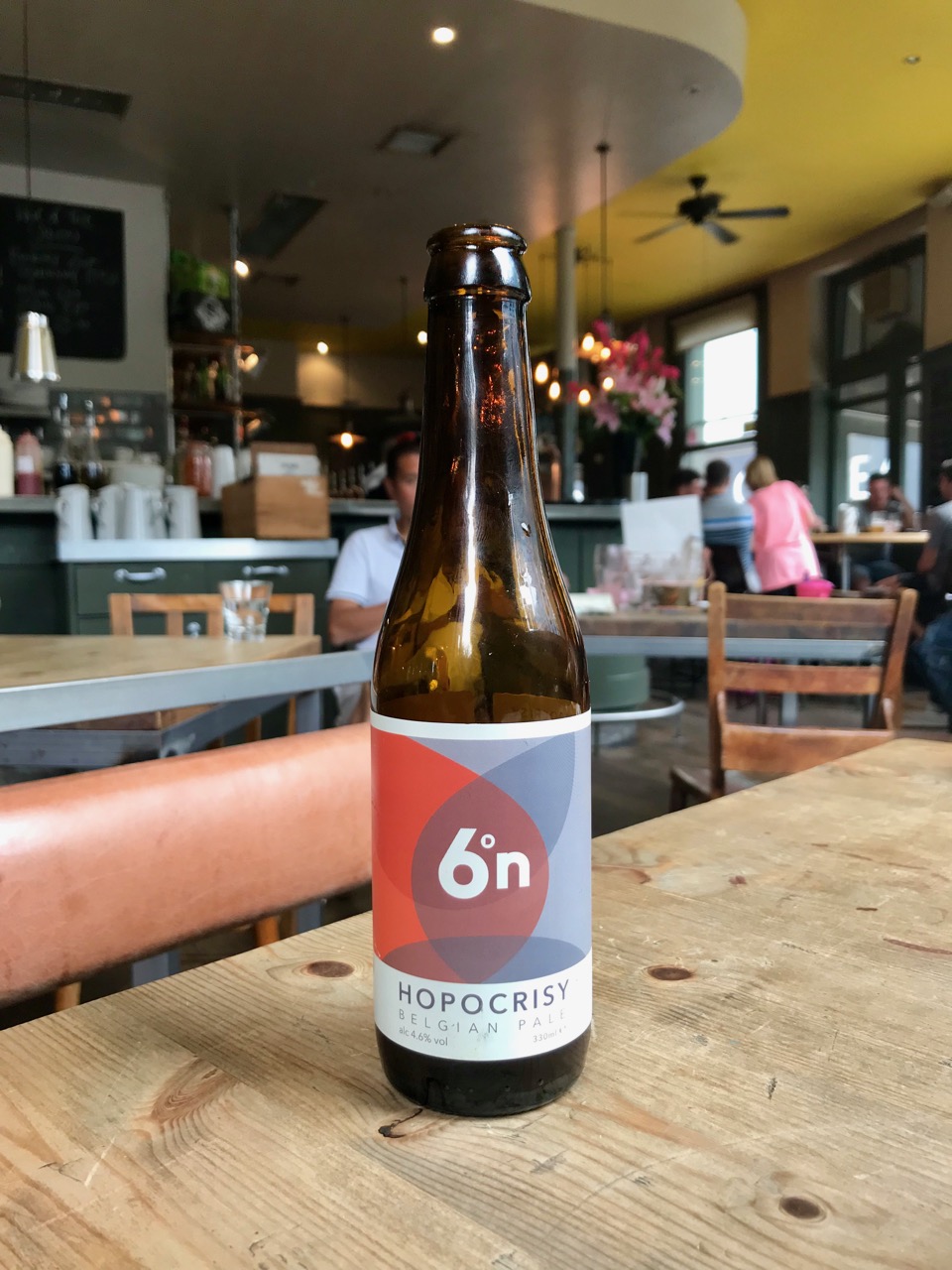 But this blog is not just about their booze, but also about their food. The menu has recently had a makeover. Whilst they still do the classic pub grub such as the Lots Beef Burger and Traditional Beer-Battered Haddock, there were some other clever and inspired twists on the menu that captured our attention.

We started with the modernist Small Plates, which are good for sharing or as individual starters if you are not the sharing type. We tried the very seasonal Grilled English Asparagus, Poached Egg, Bean and Wild Garlic Hummus, Coriander and Hazelnut Pesto. It was like 50 shades of green on a plate. Each individual ingredient was cooked well, although the egg could have been a bit fresher as the yolk didn’t have the vivid orange glow as one expects. Still, the fat stalks of asparagus were fresh and deliciously charred, and that wonderful herby pesto humming with wild garlic tied all the elements into singularity.

We were also recommended to try the Hoisin Duck, Black Sesame Crusted Potatoes, pickled cucumber, carrot and courgette. Whilst the duck salad had some spicy flavours and colourful textures, it was the perfect spheres of black sesame crusted potatoes that was the pleasant surprise on the dish.

Last but not the least, we had the Applewood Cheese Soufflé, Green Apple, Pomegranate and Walnut Salad, Herb Salsa Verde. If you like cheese, you will love this dish. The soufflé was light as a feather with a subtle whiff of the smoked apple and cheddar cheese. It paired well with the fresh, casually tossed together salad that had pomegranate, walnuts and apple for extra colour and crunch.

Diving into the mains, Kris had the Spring Vegetable Risotto, Parmesan, Rocket that delivered on its promise of creamy and abundance of greens – peas, asparagus, rocket – you name it, it was there. 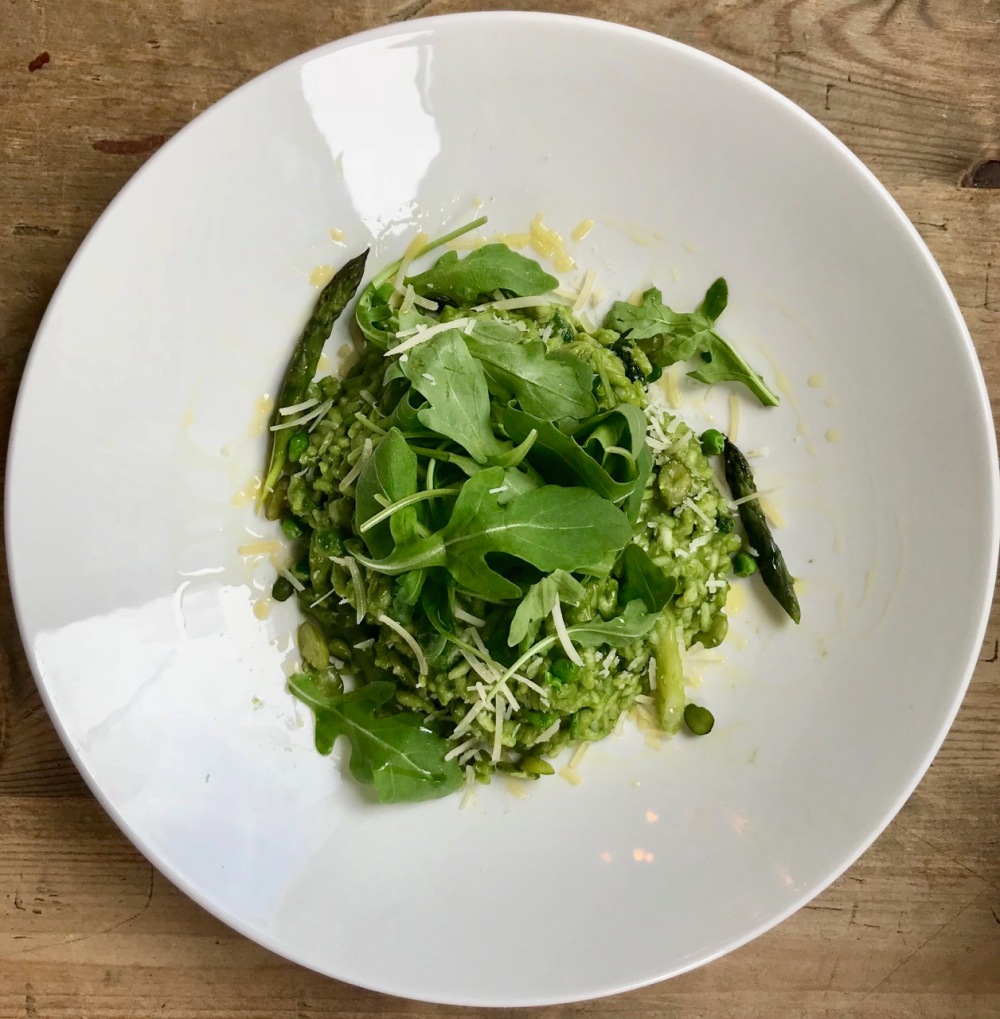 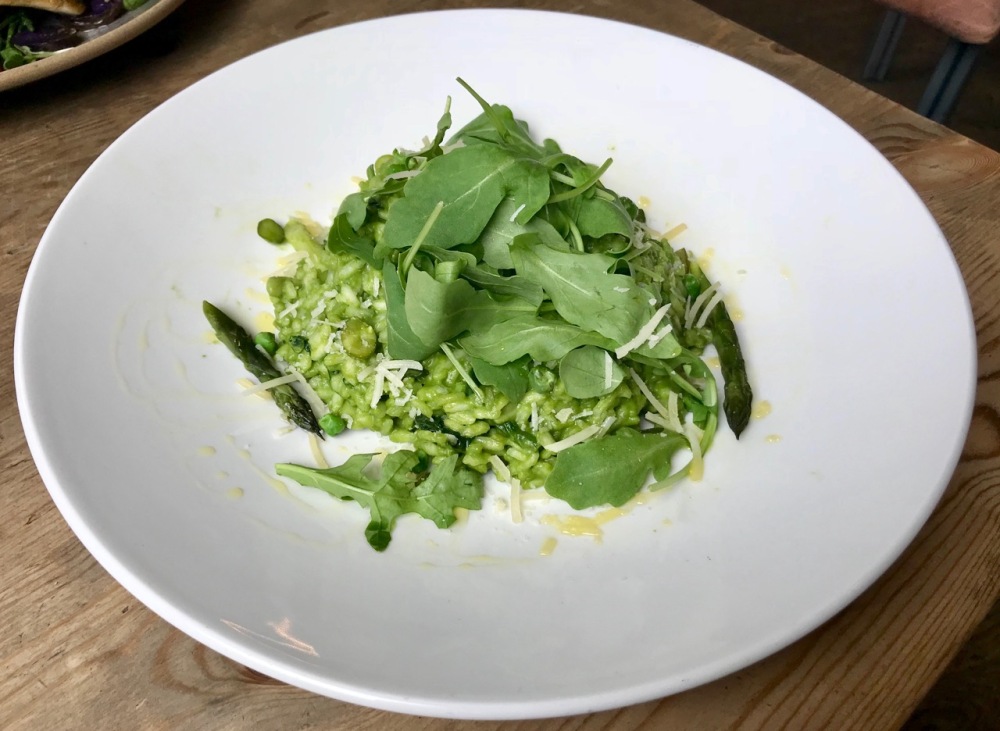 However it was my main that had us all gobsmacked – the Pan-fried Seabass, Samphire and Purple Potatoes, Parsnip and Apple Purée.

On paper, it looked like a fairly standard fish dish. But when it appeared on the table, it was something else. The sea bass was crisped on top with meaty flesh underneath. The fronds of samphire had lemony garlic flavours and tasted endearingly of the sea. But it was the glorious purple potatoes that elevated the dish from boring to breathtaking. I was seriously impressed with that plate of food. The only tiny niggle was the purée. It was sweet, sharp and creamy but there was just too much of it jostling for space and attention.

The Desserts menu was short, sweet and full of classics. We polished off a decadent and perfectly executed Sticky Toffee Pudding, Toffee Sauce, Honeycomb Ice Cream which finished the meal off nicely. 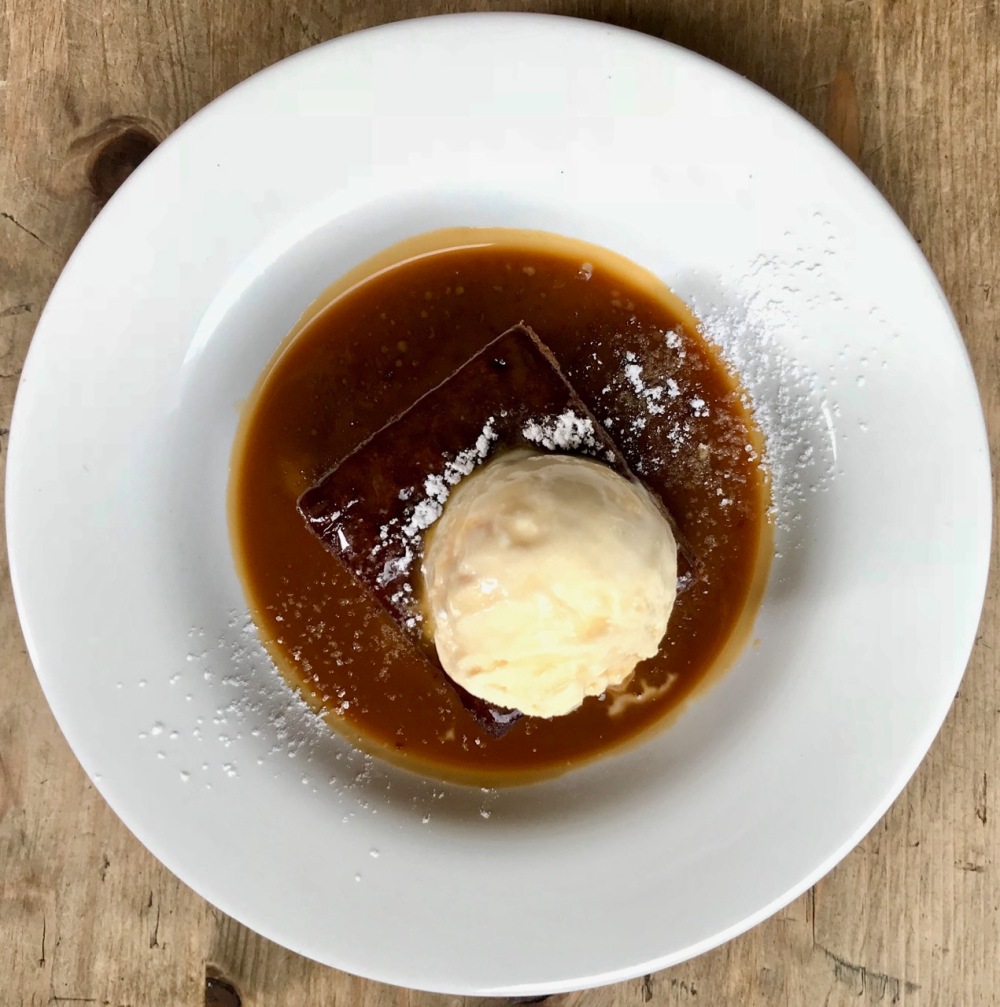 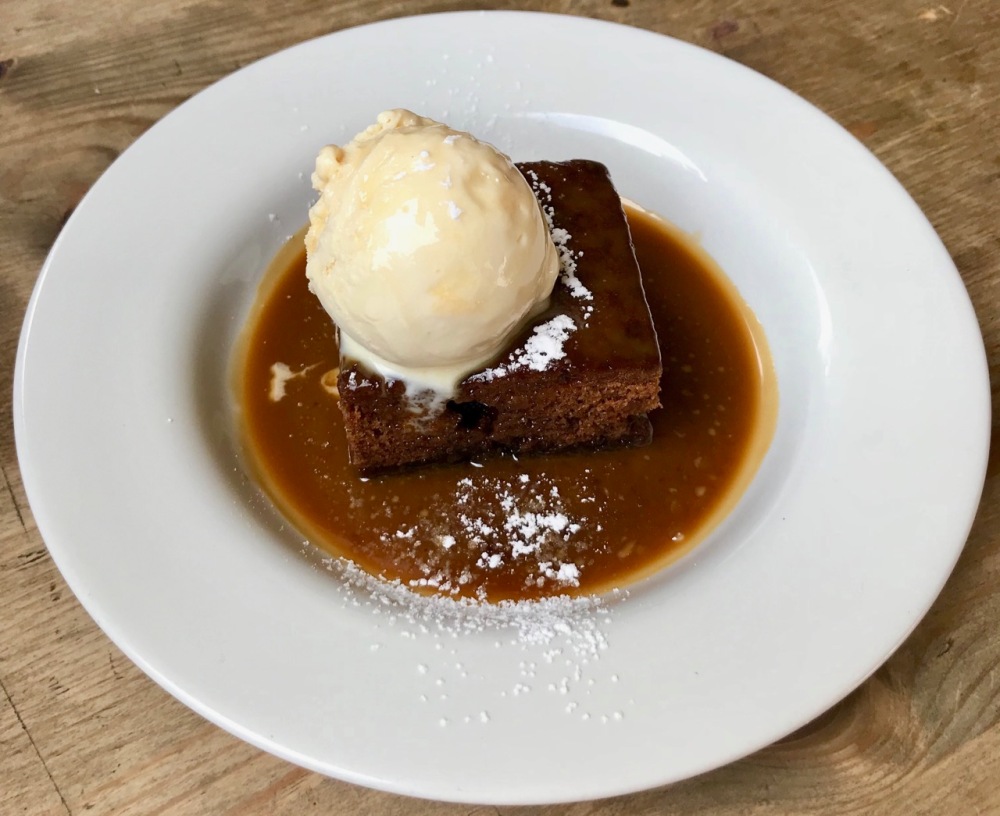 At a time when the London food scene is constantly changing and ferociously competitive, it is heartening to know that local pubs like Lots Road are raising their game, not just in terms of drinks but also in terms of food which can only mean good news for their customers.

More information can be found here.

N.B. We were guests of Lots Road Pub but all photos and opinions are mine.